I’ve only made fresh, homemade lasagna once in my life. I helped my mom a couple times when I was younger, but otherwise it was just one time in college. It amazed me with how delicious it was, especially when compared to frozen lasagna, but it took so much time. Between making all the separate components, then assembling it, I felt that it was a major accomplishment and I was very proud of my yummy lasagna. I had 2 reasons why I made it… One was because I had tons of Italian sausage from Costco and I really just needed to use it up, and two was because my boyfriend’s friend was coming to visit so I figured I’d make a tasty dinner. And then I had 3 guys, with their huge college appetites, devour through the lasagna. And it was pretty much all gone in one night. And it made me a little sad that with all my time and effort put into it, it was gone so fast with maybe one slice left, despite how large the lasagna had been.

So I never made it again, and have been settling for frozen lasagna ever since. Yes, that is my sad, tragic lasagna story. But I found a solution! Browsing online at Cook’s Country, I came across skillet lasagna, and it seemed like such a genius idea that I had to try it. It’s really easy, and only takes about an hour total with prep and cooking time. Sooooo much easier than a layered lasagna. It’s not quite the same as a layered lasagna, but it beats the frozen alternative with less effort. And if you’re like me, and end up with lasagna mush after I cut into bite sized pieces then kind of stir it around, then it doesn’t matter if it’s a skillet lasagna or layered lasagna, because it all tastes the same in the end! So go ahead, save yourself some time and energy, and make lasagna in a skillet! 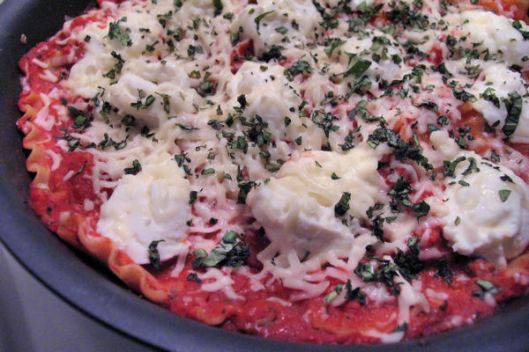 In a large nonstick skillet over medium heat, heat oil until shimmering. Add onion and ½ teaspoon salt and cook until onion begins to soften and brown, about 5 minutes. Stir in garlic and pepper flakes and cook until fragrant, about 30 seconds. Add ground meat and cook, breaking apart with a spoon, until no longer pink, about 4 minutes.

Scatter pasta over meat, then pour diced tomato mixture and tomato sauce over pasta; do not stir initially. Cover and bring to simmer. Reduce heat to medium-low and simmer, stirring occasionally to mix meat, sauce and pasta; cook until pasta is tender, about 20 minutes.

Remove skillet from heat and season with salt and pepper. Dot with heaping tablespoons of ricotta mixture and sprinkle with mozzarella cheese. Cover, and let stand off heat for 5 to 10 minutes. Sprinkle with basil. Serve.