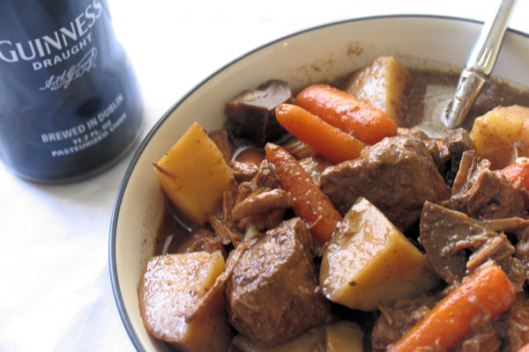 This winter has had some very weird weather… it’s been getting up to 70 degrees during the day. That’s just wrong! A few weeks ago, the mornings were consistently in the low 20’s, but it would still warm up a bit during the day. At least then it still felt like winter. Now it just feels like spring, but it’s January! It’s definitely making it tough to make the soups and stews I want. They sound so good, and there are all these different recipes I want to try, but I don’t want to eat hot soup when it’s hot out! Guess I just need to suck it up, like I did when I made this stew, and pretend it feels like winter.

As soon as I saw the recipe on Blissfully Delicious, I knew I had to try it. And I even had some Guinness sitting in my frig, waiting to be used in a recipe. Personally, it’s too heavy of a beer to just drink so I only use it in baking or cooking. It’s perfect in this stew, though! I’ve only used wine in stew before, so beer was a nice change. It made a delicious broth, full of flavor. As with any stew, you can add vegetables of your choice, so I changed up the vegetables in the recipe to add my personal touch. 🙂 And of course, slow cooker recipes are always awesome and great to have in your repertoire!

Heat the remaining 2 teaspoons oil in the skillet. Add the onions and ¼ teaspoon salt to the skillet and cook until the onions are lightly browned, about 5 minutes. Add the broth, beer, sugar, thyme, chocolate, and bay leaves. Bring to a boil, using a spoon to scrape up any browned bits; make sure chocolate is fully melted. Transfer to the slow cooker.

Add the carrots, mushrooms, and potatoes to the slow cooker. Cover and cook on low for 9-10 hours, or cook on high for 6 to 7 hours, or until meat is tender. Remove and discard the bay leaves, stir in the parsley, and season with salt and pepper to taste. Serve while still hot.