When I was a kid, Kraft mac and cheese was one of the tastiest lunches. Especially since it came in so many different shapes and characters (for some reason, the fun shapes seemed to taste better to me). When I went to college, it became all about easy mac. Quick, easy, and didn’t need a stove since I only had a microwave in my dorm room. And I haven’t had it since… 6 or more years since I used powdered cheese to make mac and cheese, and I can’t say I miss it but I do miss a nice and easy stovetop macaroni and cheese.

This stovetop mac and cheese was so good! From what I remember, it tastes similar to Kraft, but is sooo much better! And you can adjust the cheeses to whatever you prefer, as with any mac and cheese recipe. And like usual, I’ve upped the pasta amount from the original recipe. In my defense, I started with 8 ounces of pasta, but I just had so much extra sauce around the pasta so I had to make use of it! Besides, since when is more mac and cheese a bad thing! 🙂

Stovetop Macaroni and Cheese
Note: Use any combination of Cheddar cheese, Monterey Jack cheese, and American cheese to total 12 ounces.

In a medium bowl, whisk together the eggs, 1 cup of the evaporated milk, dry mustard, salt, and pepper; set aside.

In a large pot, prepare pasta according to package directions, cooking until al dente. Drain the pasta and return to pot over low heat. Add butter and stir until completely melted. Add the egg mixture and three-quarters of the cheese mixture to the pasta; stir until cheese starts to melt. Gradually add the remaining evaporated milk and remaining cheese mixture, stirring constantly, until the mixture is hot and creamy, about 5 minutes. Serve immediately.

I had a very fun and successful day of holiday baking with my mom yesterday! We made our traditional array of cookies and goodies, including some new ones that we added this year. We made sugar cookies, cinnamon swirls, chocolate cherry thumbprints, melting moments, and pumpkin oatmeal cookies with cranberries and white chocolate. I have a list of cookies and candies I want to try this year, and hopefully they’ll be good enough to make the list for next year!

In the meantime, I wanted to share my favorite pumpkin pie recipe. I don’t know about the rest of you, but my family has pumpkin pie for both Thanksgiving and Christmas. I’m not a big pumpkin pie fan, unless it’s this pie. I discovered this recipe a few years ago, and have been making it ever since. It’s pumpkin-y, lightly spiced, and creamy, all of which makes for a delicious and perfect pie! The random amount of sweetened condensed milk and evaporated milk are kind of inconvenient, but just save the leftovers for fudge or another pumpkin pie! 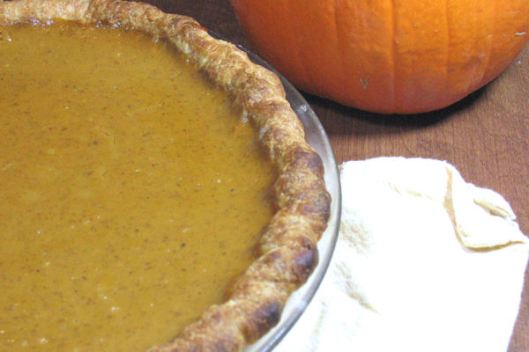 To prepare pie crust: Place rolled out pie crust in pie dish, leaving at least 1-inch overhang on each side. Ease dough into the plate by gently lifting the edge of the dough with one hand while pressing into the plate bottom with the other hand, making sure to not stretch the dough. Trim overhang to ½-inch beyond the plate rim. Fold overhang under itself onto the flat rim of the plate, and use a thumb and two index fingers to flute the crust. Refrigerate for 15 to 30 minutes.

Preheat the oven to 425 degrees F. Remove pie pan from the refrigerator and prick with a fork. Line the crust with 2 pieces of foil, and fill with pie weights, dried beans or uncooked rice. Bake for 15 minutes. Remove foil and weights and bake for 5 to 10 minutes until crust is golden brown and crisp.

To make the filling: Lower the oven to 325 degrees F.

In a medium saucepan, combine the pumpkin and sugar. Cook over medium heat, stirring frequently, until the majority of the water has evaporated and the mixture has thickened, about 15 to 20 minutes. Remove from the heat and whisk in the cream, milks, vanilla, ginger, cinnamon, nutmeg, clove, and salt. Add eggs and yolk, and whisk until thoroughly combined. Pour the filling into the pie shell and bake until set, about 45 to 55 minutes. Cool and serve.