It might not yet be mango season, but I’m all ready for it! I still have a couple bags of mango that I froze from last year. I try to make stuff last, and then I kind of forget about it… whoops! I did the same thing with my thin mints, but that also means I get very excited when I find my hidden stash!

And mango salsa is a great use for leftover/frozen mango! Especially when it’s paired up with a perfectly spiced pork chop. As soon as I saw this recipe, I knew it was something I had to try, I just wanted to wait until mangoes were more in season. And I might have jumped the gun a little, but it’s soon… very soon. So for once I’m ahead of the game, and I’ve given you some food for thought (no pun intended :P). 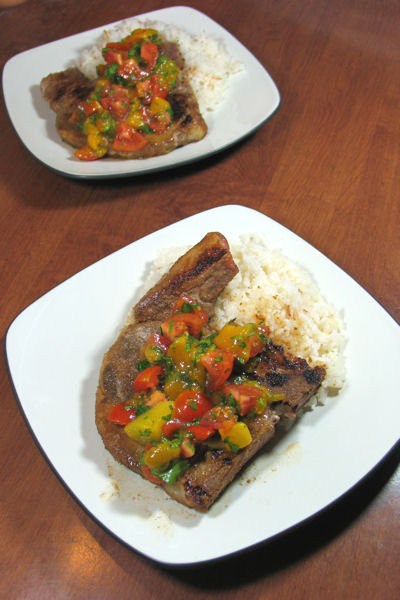 I’ve made these twice so far and they were wonderful each time. The first time, I was at my sister’s and she had pork chops, but no breadcrumbs and her original plan for the chops had fallen through, or she had forgotten an ingredient or something along those lines! She was asking me if I had any ideas, and I remembered that I had bookmarked this recipe. It worked out perfectly. She had all the spices in her pantry, and even had some mango papaya salsa from Trader Joe’s. The meal came together quickly, and I knew I had to make it again soon so my husband could try it. It was a hit with him, too, and it’s nice to know that you can easily make your own mango salsa, or use any store bought tropical salsa. So with summer right around the corner, keep this recipe in mind and spice up your summer with some tropical flair! 🙂

One Year Ago: Lemon Bars

So as of my last post, I wasn’t in the Christmas spirit, and I hadn’t started shopping. I went on a shopping spree yesterday, both online and in the stores, and got most of it done! And I am now feeling much more in the spirit. The decorations in the store, the music on the radio. It’s beginning to feel a lot like Christmas now! 🙂 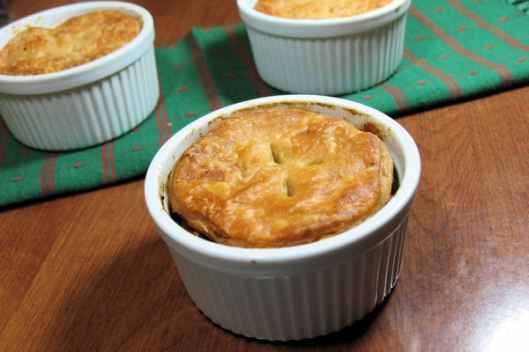 If you’re looking for a new holiday tradition, consider tourtière. It’s a French-Canadian meat pie served traditionally on Christmas Eve, Christmas, or New Years. It originated in Quebec but has since spread in popularity throughout Canada and bordering states in the United States. The recipe I found uses ground pork along with potatoes, carrots, celery and onion to make it a well rounded dish. The cinnamon, cloves, and nutmeg provide a unique and delicious flavor that is both warming and comforting. Traditionally, tourtière is served in a full sized pie dish with both a top and bottom crust. This Cooking Light version makes individual portions with only a top crust, which cuts calories and makes for adorable presentation! Bon appetit! 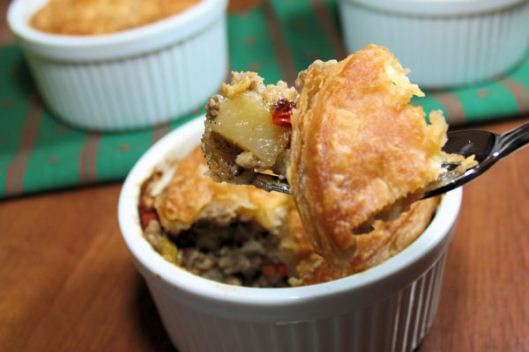 Place 1 cup pork mixture into each of 6 (8-ounce) ramekins. Roll pie dough to an 11-inch circle. Cut dough into 6 (5-inch) circles, re-rolling dough as needed. Place 1 dough circle on each ramekin, tucking edges inside. Cut 4 slits in the top of each circle. Place ramekins on a baking sheet and bake for 40 minutes or until golden and bubbly.

Happy Labor Day (a little bit early)!  I know a lot of people tend to do barbecues or picnics during their three day weekend for Labor Day. I’m jealous of these people… I haven’t gotten a 3 day weekend for a holiday in over 4 years! But for those of you who are off, enjoy yourselves and celebrate the end of summer! These pulled pork sandwiches would be a great way to send off summer. They aren’t officially barbecued, since the meat is done in the slow cooker, but they have barbecue sauce and could work well as picnic food.

Before this, I had never thought myself to be a fan of pulled pork. I had tried some pulled pork sandwiches that other people had ordered, and they just never seemed that great. But this stuff is awesome! The pork is moist and tender, and deliciously spiced before any barbecue sauce is even added, which means the addition of barbecue sauce makes it that much greater! Especially when you use a sauce you love.

Now you can of course use your own favorite barbecue sauce, whether it be store bought or your own favorite recipe. But if you have never before made your own barbecue sauce, I strongly urge you to try it. It is so amazingly good, you’ll never be able to go back to the bottled stuff! The barbecue sauce I have listed is more of a vinegary one, so it’s on the thinner side and has a bit of tang to it, with a little bit of a bite from the cayenne pepper. But oh man, is this stuff good! I was so happy when my friend gave me her recipe and I made it myself. It was love at first taste! 🙂

As a reference for how much this makes, I could only find a 5½ pound pork shoulder, and I still got about 10 sandwiches. We were having them for lunches on our weekend and as quick dinners. They went pretty fast… this stuff is that good.

Slow-Cooker Pulled Pork Sandwiches with Homemade Barbecue Sauce
Note: Feel free to use your favorite bottled barbecue sauce, or your own homemade sauce.

To make the pulled pork: To make the spice rub, combine black pepper through sugar in a small bowl. Massage spice rub into meat. Wrap tightly in double layer of plastic wrap; refrigerate for at least 3 hours or up to 3 days.

Unwrap roast and place it in slow cooker. Add liquid smoke, if using, and ½ cup water. Turn slow cooker to low and cook for 8-10 hours, until meat is fork-tender.

Transfer roast to cutting board; discard liquid in liner. Pull meat by tearing it into thin shreds with two forks or your fingers; discard fat.

Place shredded meat back in slow cooker; toss with 1 cup barbecue sauce, and heat on low for 30-60 minutes, or until hot. Serve on rolls, pouring additional barbecue sauce on top of the meat as desired.

To make the barbecue sauce: In a small saucepan over medium heat, combine all ingredients and heat through.

How many people have actually heard of broccoli rabe? Rapini? Those are the two names this green most commonly goes by in the United States, and usually it’s sauteed and served as a side dish at restaurants. Despite the name, it has absolutely no connection to broccoli, but it does have little florets that look very similar to broccoli interspersed among the leaves. It is actually most closely related to turnips! My guess is that it’s similar to turnip greens, but I’ve never had them so I can’t say for sure. I do know that it is quite tasty and is one of the few vegetables that I really enjoy. It wilts down nicely when sauteed with garlic, and is even tastier when thrown in with pasta and sausage! 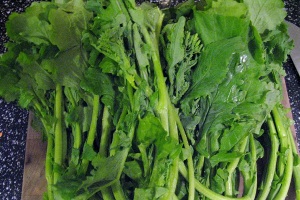 Broccoli rabe might be difficult to find, but if you happen to come across it, it is definitely worth trying. It’s typically found with all the other greens, like kale, collard greens, and mustard greens. If you can’t find it but still want to try this delicious and simple dish, just use broccolini. Broccolini is related to broccoli, and similar in taste, but has long stalks and small broccoli florets.

This dish is light, with only an olive oil and garlic sauce coating the pasta, and it has a perfect ration of sausage to greens. And if you’re anything like me, it’s a great way to add some green to your diet!

Meanwhile, in a large skillet over medium heat, heat the olive oil. Add the sausage and cook, breaking up with a spoon, until the sausage is brown and juices form, about 8 minutes. Add the garlic and red pepper flakes, and saute until fragrant, about 30 seconds. Add the broccoli rabe and pasta, and toss to coat; add enough reserved cooking liquid to moisten, adding ¼ cup at a time as needed. Stir in the Parmesan cheese and ground pepper, adding salt to season as needed. Transfer to bowls and serve.